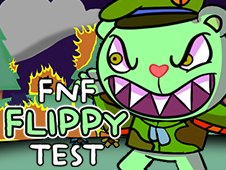 What is FNF Flippy Test 2?

FNF Flippy Test II is the second version of the test game in which you will have as main character Flippy, the green bear from Happy Three Friends. To play this game you will have to be as creative as possible in terms of musical notes and try to create music using the sounds in the game that you can create by clicking on the arrows at the bottom of the game. Each arrow you press will create a special sound and will give you the opportunity to compose unique songs. Also, in the game, you will be able to use the mouse to create a different effect when you click on the arrows using the mouse.

To discover these modes you will have to press the left button of the game, the one that symbolizes Flippy's head.

At the same time, in the game you will be able to find three special buttons: A, S, D that will create three unique scenes each time you use them.

Use the arrows to play;