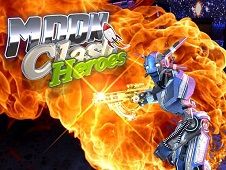 What is Moon Clash Heroes?

Do you like the action? Do you like guns, shootings, and fights between two opposing teams? Then you will have to try the new Moon Clash Heroes game in which you have to make a team as valuable as possible to rely on when going to war.

The action of the game takes place on the moon, which is why gravity often has no effect, but in all the rooms you walk in, you will notice that there is gravity. An interesting thing is that each superhero in Moon Clash will be able to transfer, to teleport from one side of the map to the other using specially created tunnels in which you will fly very fast because those tunnels use the force of the vacuum to transport.

In the beginning, you will have to build your robot with which you will be able to destroy all the enemies in the game. In this chapter, you will be able to equip your hero with a rifle, machine gun, photon weapon, grenade launcher, or even armor. Depending on the outcome of the battles, if you are the winner, you will be able to buy new weapons, develop your skills (running, jumping, defense, strategy) so that you can win more and more missions.

Don't forget to equip your team with the best weapons, with the best ammunition, because you will need to be surrounded by fighters well prepared for this war.