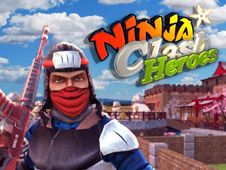 What is Ninja Clash Heroes?

Ninja games online can do no wrong, even more so when they are also multiplayer action games where you and players from all over the world become ninjas in an arena and then have to fight one off another, which is what you will be able to do with the game called Ninja Clash Heroes, a battle royale-like online game where you are in for a lot of fun if you allow yourself to have it, of course!

What are the ninjas clashing for?

Well, there is no main reason the ninjas have to fight one another, the main thing remains that you will be thrown on this map with the other ninjas and have to do your best to take down all the other ones you encounter, using your skills with the guns and weapons to shoot them down and be the last one standing.

As you stroll through the map, all sorts of new and better weapons can be found, as well as health packs, upgrade for your weapons, grenades, and more useful stuff that can lead you to victory. You can become a ninja in various classes, such as scout, sniper, sentinel, or grenadier, and you can customize your character as well as level them up from the main menu.

How to play Ninja Clash Heroes

As for how you control your avatar in order to achieve your goals and win the matches, use the W, A, S, D keys to move, the spacebar to jump, G to throw grenades, shift to run, and the mouse to aim and shoot, while R is used for reloading. Good luck, and godspeed to you all!