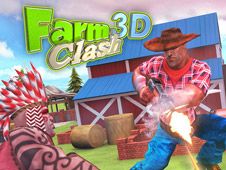 What is Farm Clash 3D?

Farm Clash 3D is the latest entry to the highly-popular Clash Games 3d series of multiplayer shooting games, a series that brings you into a brand new whole world with each new edition, and this one will make the map and arena be that of a farm, and as farmers usually have guns, this makes for an awesome setting you will surely enjoy!

Drop on the farm and clash against players worldwide!

As we said, you will be a gun-equipped farmer who has to go up against other players from all over the world on the same farm map, doing it in a battle-royale style where you have to shoot down members of the other team to get more kills. Or, maybe you play solo, one thing is certain, you have to survive and not get shot and killed yourself.

Try to get as many kills as possible to climb in the rankings, and with the money, you earn for your performance you can buy new weapons, gear, upgrades, and the like or a brand new avatar. Items can also be found and picked up on the map itself, so do that in case you want to get the upper hand, and you should!

Move with WASD, jump with space, crouch with C, use the mouse to aim and shoot. Good luck, you need it and check out more clash games brought so far here, you are bound for a terrific time!