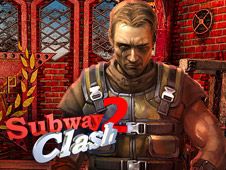 What is Subway Clash 2?

The Clash Games series is one of our best when it comes to multiplayer shooting games 3d online, with us being very excited that at the moment we can share with you a sequel to a popular entry in the series, as right now you get back to the nitty-gritty underworld through Subway Clash 2, now with even more action and fun to be had!

Can you dominate the battle of the subway?

As it is said in the title of the game, you find yourself on a map in the subways, one in the underground, where, if you play the campaign, you have to take part in a mission with your team to shoot down all the members of the other team, and you should definitely aim to be the final one standing.

Of course, the same goal you have in the multiplayer mode as well, where the members of your team and the enemy one is made up of real players, and you need to shoot them down before they shoot you, and try climbing the rankings by getting a really huge kill streak.

Move using W, A, S, D, accelerate with shift, jump with the spacebar, use R to reload, and aim and shoot your guns with the mouse. Use C to crouch, throw grenades with G, and switch weapons with the number keys.

We can now only wish you a successful mission, and we definitely invite you to keep playing browser clash games multiplayer and keep the fun going in other scenarios and on different maps with other characters too!