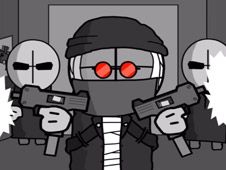 What is Madness Combat V?

Today we are offering you up something a bit different from most games on our website, and the reason for that is because Madness Combat V is not a game, but rather a flash animation, the fifth part in the Madness Combat series that you probably already love a lot, because if you didn't, why would you be here?

This series is a flash animated series from NewGrounds, one that focuses on various killers, assassins, soldiers, fighters, and other dangerous figures, all of which are always targeting one another and trying to kill, not to be killed.

You probably know some of them already from our FNF Games series, such as Hank, who is an assassin with red sunglasses who will also feature in this part.

Watch him as he uses his signature string attacks on various enemies, with each new kill getting more creative than the one before it, no doubt. Of course, he also uses guns and other weapons, don't stress!

Good luck to you all, we wish you all the best, and we hope that you stick around for more fun to come because soon enough you might get other parts in this series here for you!