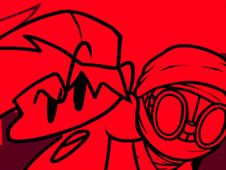 What is Friday Night Madness: Nevada’s Most Wanted?

Hank from Madness Combat wants to assassinate Boyfriend, and the only way for him to survive is to win the musical battle in FNF against Nevada’s Most Wanted criminal, and we invite you to do this on a bunch of new amazing songs:

It's time for Friday Night Madness vs Nevada's Most Wanted (Hank)!

Whether you're playing in the story mode or free play mode, to win you need to do the same thing, and that is hit your notes according to the charts until the end of the song. That is when you win, which means that if you miss hitting notes too many times you will lose.

So, when you see floating arrow symbols match above BF's head, that is when you need to press the identical arrow keys to hit your notes. Good luck we wish you all in all this and more, and we invite you to stick around for more fun to come only on our website!