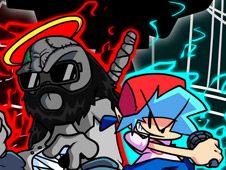 What is Friday Night Funkin vs Jeb v2: Madness Expanded?

Come play Friday Night Funkin vs Jeb v2: Madness Expanded right now if you loved the original but want a new song as well as awesome new graphics, since that is what this game offers, with the first two songs being identical to the first one, but there's a third one which also brings along Tricky, the mad clown of Madness Combat, and, of course, we've got plenty of new animations, sprites, and the like. The songs are:

BF Vs Jeb, Round 2, now with expanded madness!

Whether you are facing this character in the story mode or free play mode, winning is done in the same way, by reaching the end of the songs. To do that you need to keep playing your notes until the end of the charts.

So, when you see arrow symbols float and match above BF, make sure to press the identical arrow keys. If you miss doing it too many times in a row, you lose. Good luck, enjoy!