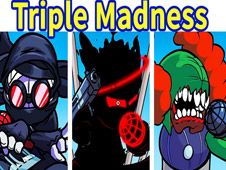 What is FNF vs Triple-Madness (Tricky, Auditor, Jeb)?

Experience the Triple-Madness by having an FNF battle with Tricky, Auditor, and Jeb, three characters that have come together all from the Madness Combat series that this one crosses over with a ton of times, and precisely because it is three-on-one, Boyfriend hops you will be ready to give him assistance and win against them, together!

Face the Triple-Madness of Tricky, Auditor, and Jeb, only in FNF!

You will have to reach the end of this song in order to win and to do that you have to keep hitting your notes until the song's conclusion. To do that, press arrow keys at the same time as the identical arrow symbols match above BF's head. Pressing them wrong, too early, or too late, all count as misses, so don't have too many missed notes in a row, or you lose and have to start again from scratch. Enjoy!