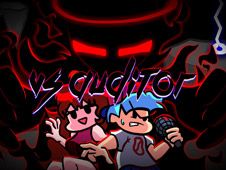 What is Friday Night Funkin’ vs Auditor?

It's always a good idea to check out our website as often as possible, since, as you can see right now, you never know when brand new FNF mods are going to pop up, just like it had been the case right now and here for Friday Night Funkin’ vs Auditor, where this is yet another awesome character coming from the Madness Combat series, the first time you face him, and you do it on the two following custom songs:

Show the Auditor your musical checks and balances!

Whether you duel this character in the story mode or free play mode, give it your best and be highly focused so that you play all the notes of the songs until the songs reach their conclusion, since that is how you achieve victory.

To hit notes in this kind of reaction time game, watch for the floating arrow symbols around BF, and when they match above his head, make sure to press the same arrow keys.

Be careful about missing the notes, because if that happens too many times in a row, you eventually lose, and have to start again. We don't wish you that, but all the best and lots of fun!