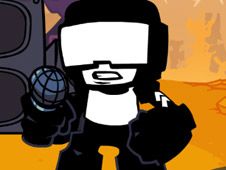 What is Friday Night Funkin' BUT YOU ARE THE TANKMAN?

Our category of FNF Games online keeps on bringing one surprise after another, and today will be yet another day filled with awesome and fresh new content for this series, just like we're proving to you right now by the addition of the game called Friday Night Funkin' BUT YOU ARE THE TANKMAN.

Become the Tankman and win the musical battles!

Tankman, an original character from a Newgrounds series who was even their mascot on the logo for a long time, has been featured in the series before because in one of the mods he was the antagonist you had to defeat, but this time he is the protagonist, so you will assume the role of Tankman and try to win the singing contests!

"Ugh", "Guns", and "Stress" are the main three custom songs you will play on and which are new to the game, but otherwise, help Tankman defeat all the other characters, starting from the week of your choosing. Press the arrow keys at the right time to hit all the notes and make the progress bar turn green.

Be very careful not to have too many misses in a row, one after the other, because if that happens, you have to start all over again from scratch. Good luck, enjoy, and we hope to see you around some more!