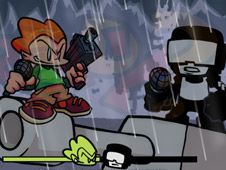 What is Paralysis but Pico & Tankman Sing it?

Welcome to FNF's Paralysis song, but this time it is being sung by none other than Pico and Tankman, with you becoming the later character, which is quite awesome, as he has not been featured that much lately, and it is always a joy to have him around!

Sing Paralysis with Pico and Tankman in FNF!

To win the confrontation you need to reach the end of the song, and to do that you need to hit your notes according to the charts, because if you miss them or press them wrong, you will have your health bar decreased, emptied out, and in return, you will lose.

So, when floating arrow symbols match above Tankman's head, that is when you need to press the identical arrow keys. Now you have the gist of the game down, so make sure to start it right now and have the best time possible!