FNF: Chasing, but Tails and Sonic Sing it

FNF: Glitcher but KB and QT sing it 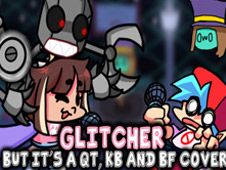 What is FNF: Glitcher but KB and QT sing it?

KB and QT are two robot characters that have made quite the impression in the Friday Night Funkin community, and we are very happy that they are making their return into it right now, with the awesome new mod called FNF: Glitcher but KB and QT sing it, where this song that the two of them are singing together comes from the first FNF Vs Hex mod.

Have fun by singing with KB and QT, right now!

When you see that arrow symbols above your character match one another, it is at that moment you will need to press the same arrow keys, and you need to keep doing that until the end of the song since that is the way that you are going to win.

Be careful about missing to press the keys, because if you do it too many times in a row you are going to lose the game, and we are sure that this is not something that you want happening, right? Good luck!