FNF: Glitcher but KB and QT sing it 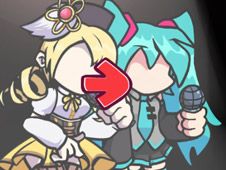 What is FNF Dead Hope, but Mami, Miku, and Bendy Sing it?

In the newest FNF mod of our website you're invited to sing Dead Hope with a mix of characters that is quite interesting, as we're talking about Mami, Miku, as well as Bendy, so get ready for a dose of fun unlike you've had here before!

When you see floating arrow symbols match above the characters to the right, that is when you need to press the identical arrow keys to hit your notes, and doing it until the song ends leads to your victory, but missing your notes multiple times in a row leads to losing, so don't let the health bar get emptied out, but make sure to win instead!