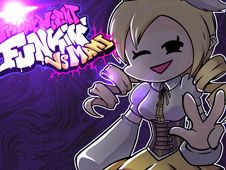 What is Friday Night Funkin vs Mami?

Mami Tomoe is one of the main characters in Madoka Magica, one of the most riveting and most celebrated magical girl anime in history, mainly because it is a darker take on the genre which has taken everything you knew about it and gave it a whole new meaning, and you are now battling against her on the custom song called Connect, with more songs to follow in the future, since this is just the demo!

Does BF have a better rhythm than a magical girl? We hope he does, and you win!

When you see that arrow symbols above BF's head are matching with one another, make sure to press the arrow keys that match them at the same time, since that is how you hit the notes of the songs at the right time, and doing so until the end and turning the progress bar towards you means you have won.

Be very careful not to press the keys at the wrong times, because if you make that mistake too many times, you also lose the game, and we're sure you don't want that to happen, right? Good luck, and enjoy!