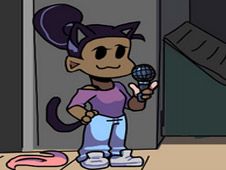 What is Friday Night Funkin vs Momi?

Momi is a woman who is an original character and a mother-like figure of the FNF Games series, with her being the new antagonist that Boyfriend has to face off against in a rhythm battle, something that we hope you will help him win in this game called Friday Night Funkin vs Momi, on the following songs:

Can you help BF defeat Momi?

To start things off you will choose between the story mode and the free play mode, and pick a level of difficulty. You win if you reach the end of the songs and the progress bar is in your favor, simple as that. To achieve this you need to have a good rhythm and sing the song according to the chart.

How? Well, when you see the arrow symbols that float around BF match with those above him, you need to press the same arrow key on your keyboard to play the same note of the song. This also means that if you miss playing too many notes of the songs in a row, you lose the game, so don't let it happen!

Good luck, enjoy, and stick around for even more fun still to come!

FNF vs No-More-Innocence but no Virus
ADVERTISMENT