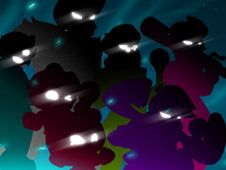 It really is a great time to be fans of both Friday Night Funkin and the Brawl Stars/Brawl Guys series of multiplayer battle royale games, since right at this moment our team is delighted to share with everyone the game called Friday Night Funkin Brawl Stars, where characters such as Boyfriend, Girlfriend, or Daddy Dearest have been replaced with avatar and classes of soldiers from this game. Awesome right?

Learn the rules of playing FNF, now with characters from Brawl Stars!

To win each musical battle you are going to need to turn the progress bar green in your favor by the end of the song, so play, sing, and rap the song better than the other opponent, never going out of rhythm.

To play notes you use the arrow keys. When arrow symbols above your character match one another, that is when you have to press the same arrow key on your keyboard to hit the note.

Of course, if you mess up the timing and miss hitting too many notes in a row, you will have damaged the song too much and will have lost, so be very careful! Good luck towards winning we want to wish you all!