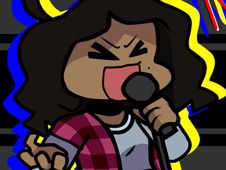 What is Friday Night Funkin vs Sunday Full Week?

Sunday is a really talented girl and musician who is looking for a co-vocalist for her band, and she is testing out Boyfriend for that role, which is why you are playing his role and doing your best to sing good and get it since BF really needs a gig right now. This is the story of our new FNF game called Friday Night Funkin vs Sunday Full Week, which is an update we really are excited about since we've had Sunday here before, but she had no original songs, and now she has four:

Start by choosing if you want to play in the Story Mode or the Free Play mode, and then give it your best to reach the end of the songs and sing so correctly according to the charts that the progress bar is going to be in your favor.

To achieve that, when you see arrow symbols matching above Boyfriend, press the same arrow keys on your keyboard, simple as that! Try not to miss pressing too many keys consecutively, because that happening will cause you to lose. Enjoy!