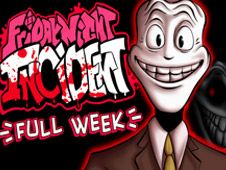 FNF Vs Mr. Trololo is an alternate name to this new mod we are happy to bring you over right now, which is an expanded edition of the first one featuring this troll face character that sings really weird, who you will now face off against once more, now with an updated tracklist:

Make a choice between the story mode and free play mode from the game's main menu, and whether of the two you pick, give it your best to reach the end of the songs by playing all their notes according to the charts, the only way to achieve victory.

This means that you need to watch for the moment when arrow symbols float and match above BF, and press the identical arrow keys. If you miss doing it too many times in a row, you lose and have to start again from scratch. Enjoy!