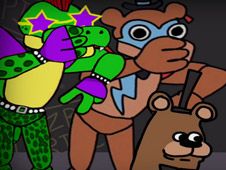 What is FNF: Freddy Beatbox But It’s a FULL WEEK Mod?

Once again we invite you to have tons of fun with helping Boyfriend go up against Freddy from the FNAF Games series, who is not haunting you today, but is doing beatbox, a rhythmic art form that you will challenge him on and try to defeat him, something that we invite you to now does on three amazing awesome songs, where some of his creepy friends will join him as well:

Win the Beatbox match against Freddy!

Choose between the story mode and free play mode in the main menu, but no matter your pick, to win you still got to do the same thing, which is reaching the end of the songs by playing their notes according to the charts.

This means that when you see arrow symbols float and match above BF, you press the identical arrow keys. Don't miss hitting too many notes in a row, or you lose.

Good luck to all you future beatboxers, and we hope to see you around some more, as cool new content is always right around the corner!