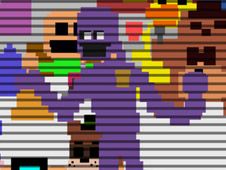 What is FNF Funkin at Freddy’s vs Afton Full Week?

Welcome to FNF Funkin at Freddy’s vs Afton Full Week, which once again gives you the chance to help BF take on and defeat the legendary creator of FNAF in a rhythm battle, now on no less than 11 tracks, even more so than in the previous versions of this mod! The tracklist is as follows:

Let's funk at Freddy's Vs Afton!

Whether you play in the story mode or free play mode, winning is achieved by reaching the end of the songs by playing all your notes according to the charts, until the songs conclude.

So, when you see arrow symbols float and match above BF, press the identical arrow keys. Don't miss doing it multiple times in a row, or you lose and have to start again from scratch. Enjoy!