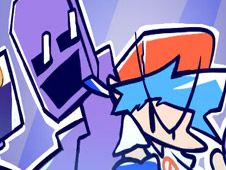 What is Funkin' at Freddy Vs. Afton?

Afton is the famous creator of the FNAF animatronics, and he now features the newest FNF antagonist you have to defeat, in addition to various other enemies. This is not the first time he appears here, but this is the most complete mod with him so far, as we've got the following tracks for you:

Freddy Vs Vs Afton, one of our best FNF x FNAF crossovers yet!

After making your choice between the story mode and free play mode, in either case, win by reaching the end of the songs, something you do by hitting your notes according to the charts and turning the progress bar towards you.

This means that when you see arrow symbols float and match above your character, you need to press the same arrow keys at the exact same time. If you miss doing it multiple times in a row, you lose and have to start again from scratch. Enjoy!