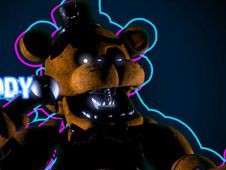 What is Friday Night Funkin vs Freddy Fazbear?

Boyriend somehow got locked up inside of Freddy's Pizzeria, and the only way for him to escape this horror place is by beating Freddy Fazbear in a rhythm battle, something that you will help out our protagonist with right now, if you play this awesome mod called Friday Night Funkin vs Freddy Fazbear, and win on its three original songs:

To play notes in this kind of rhythm game, you will see arrow symbols above BF's head matching with one another, and at that time you have to press the same arrow keys, something that you have to keep doing until the end of the song to win when you will see the progress bar filled towards you.

Be careful not to miss pressing the keys wrong too many times in a row, because you then lose. Now, choose between the Story Mode and Free Play mode, pick a level of difficulty, and start having fun!