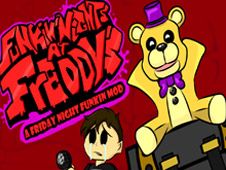 What is Funkin Nights at Freddy’s?

Two of the biggest independent video game franchises on the internet of the moment are now coming together in one game for you to play, which combines music with scary elements in a way never seen before, as you would expect from a Friday Night Funkin' Games and Five Nights at Freddy's Games crossover!

FNF VS FNAF: The Crossover you've been waiting for!

The new antagonists that Boyfriend has to face off are the animatronics, mainly Freddy, a bear coming from the FNAF series, where Freddy is the main animatronic evil demon that haunts a pizzeria, where the security guard must survive all night long. Well, this time, Freddy has attacked Boyfriend, so he will deal with him not with flashlights, but with music and rhythm!

How to play FNF Games, explained!

To defeat the animatronics, BF needs to have a better rhythm than them and hit all the notes of the songs at the right times until the songs finish. When arrows float above BF and match, hit the same arrow on your keyboard, at the same time, and if you do so, you keep going, but if you are missing notes one after another, you will eventually lose.

Good luck to you, we hope you win, and banish Freddy away, because otherwise you will be forever stuck in his pizzeria, an separated from Girlfriend, and you don't want that to happen, right?