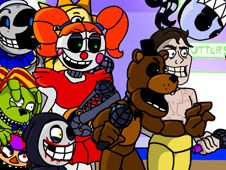 What is FNF: Five Funky Nights At Freddy’s?

Some people can easily confuse FNF Games with FNAF Games since they sound so similar in their abbreviations, but today we are delighted to see a crossover between the two, so whether you are a fan of one series or the other, this game will give you the best of best worlds, where Boyfriend and Girlfriend are facing off against the evil animatronics at the pizzeria!

The original six weeks songs remain, but the antagonists of each week are replaced with characters from FNAF:

You get to face off against these antagonists in either the Story Mode or Free Play mode, it is totally up to you, and what you have to do in both is play the songs so well that you reach their end and make the progress bar turn towards you.

Press arrow keys at the same time as arrow symbols above BF match with one another, but be careful not to miss doing that too many times in a row, or you lose the whole game. Enjoy!