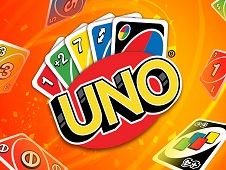 What is UNO Online?

UNO is one of the most popular card games on Play-Games.com, which is why we guide you to try this game no matter which way you choose to play, single player or 2 player mode. At the same time, for the advanced ones, the game has a multiplayer mode in which you will be able to participate in the most important UNO online matches against other real opponents, professional people in this game.

What is the UNO game and what are the rules of the game?

The game appeared in 1971 in a small suburb, where it developed and improved more and more, after which the license of the original game was sold to a larger company that knew how to distribute this game more. far to children and to the entire population of the planet. The goal of the game is to be 500 points first, but these points cannot be made up of a single game, which is why you will have to play several rounds to reach this score. The card pack contains 108 cards, 4 WILD and Wild Draw FOUR cards, and another 25 colored cards (yellow, blue, red, and green).

Have you tried this game? What do you think about it, leave us a comment!