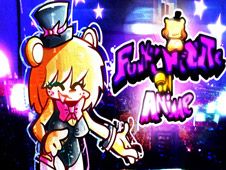 What is FNF vs Five Nights in Anime?

In FNF vs Five Nights in Anime, as you would have guessed, the animatronic characters of FNAF have been transformed into anime characters, making it really fun and cute for you to battle them now in rhythm battles, something we invite you all to do on the following custom songs:

After you've made your choice between the story mode and free play mode, in either case, give your best to reach the end of the songs by playing their notes according to the charts, since that is how you win.

To do it, press arrow keys at the same time as the identical arrow symbols are matching above BF's head. Don't miss doing it too many times in a row, or you lose and have to start again from scratch. Good luck, enjoy!