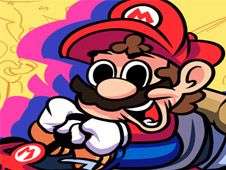 What is SMK x FNF (Mario Kart vs FNF)?

There have been plenty of previous crossovers between FNF Games and Mario Games added to our website, which is why we are very glad that right at this moment we could share with you the game called SMK x FNF (Mario Kart vs FNF), where Boyfriend and Mario are battling each other in a musical battle once more, but this time they are also driving go-karts as well.

Boyfriend VS Mario, a kart rhythm battle for the ages!

So far you've got the demo version here, where there isn't a story mode or a free play mode, and you just get the tracks one after another. The goal remains the same, which is to sing until the end of the songs and turn the progress bar in your favor.

To do that, press arrow keys at the same time as arrow symbols above BF match, and be careful not to miss doing that too many times in a row, since that means losing the game. Good luck, enjoy!