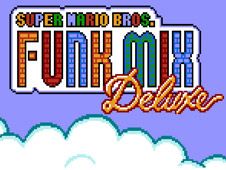 What is FNF vs Super Mario Bros (Funk Mix DX)?

The Super Mario Bros return as FNF antagonists for you and BF to face off against right now and here with this new Funk Mix DX, where all of us have had tons of fun from start to finish, where in addition to the two brothers you will duel many other characters in the series, and on quite a few songs as well:

Let's funk it up with a mix of Super Mario Bros characters, only in FNF!

Whether you are playing in the story mode or free play mode, to win you need to do the same thing, which is reaching the end of the songs by playing all their notes according to the charts and turning the progress bar towards you.

To do this, when arrow symbols match above BF's head, that is when you need to press the identical arrow keys. If you miss doing it multiple times in a row, you lose and have to start again from scratch. Good luck and the best we wish you all!