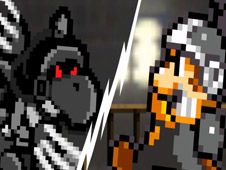 Get ready for new FNF opponents with the mod called Super Mario Funk Z, where Mario needs your help to defeat Captain Basilisx and his Koopatrol, which we invite you to do right now and here on the track called 'petrification'!

You will have to reach the end of the song to achieve it and to do it, press arrow keys at the same time as the identical arrow symbols match above Mario's head, keeping at it until the chart is done, and so is the song. Know that if you miss doing it multiple times in a row, you lose and have to start again from scratch. Good luck, enjoy!