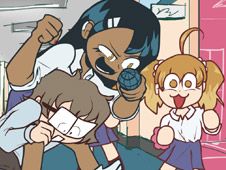 What is FNF Funk vs Miss Nagatoro?

Miss Nagatoro is one of the most popular anime characters in the last few years, who we now invite you to have a funkin' battle against in the world of FNF, with the series crossing over with anime quite a lot, and you will now have a new and original song for this mod, called 'Tomboy'!

Let's funk with Miss Nagatoro, only in FNF!

After choosing between the story mode and free play mode, give your best to reach the end of the songs by hitting your notes according to the charts, which is how you win in both instances.

To do that, press arrow keys simultaneously as the identical arrow symbols match above BF's head, but be careful not to miss doing it too many times in a row, because too many missed notes means losing the game. Good luck, enjoy!