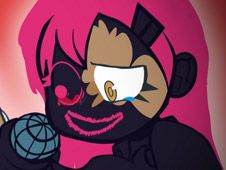 What is FNF Corruption Nagatoro vs Evil Boyfriend?

In our newest FNF mod Corruption has reached Nagatoro and has also made Evil Boyfriend appear, so we're about to have quite an interesting battle, even more so since we are doing it on multiple songs:

An FNF Corruption battle of Nagator Vs Evil Boyfriend is here, let's go!

Whether you're playing in the story mode or free play one, reach the end of the songs by playing their notes according to the charts to win, something that you do by hitting notes continuously until then with BF. So, when arrow symbols match above his head, that is when you need to press the identical arrow keys.

Be careful not to miss hitting said notes too many times in a row, since that will lead to your loss, meaning that you have to start again from the start of the songs. Let's start and have fun!