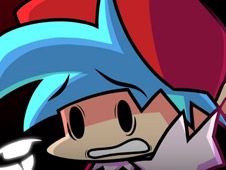 What is FNF Boyfriend Lost to Corruption?

FNF Boyfriend Lost to Corruption is a mod where Boyfriend has to fight off against the evil version that is trying to take over him, something that you will have to use all your inner rhythm in order to prevent from happening by defeating this evil!

Reach the end of the song by hitting notes according to the charts until then to win, something that you do by pressing arrow keys simultaneously as the identical arrow symbols match above BF. Know that if you miss your notes too many times in a row and the health bar depletes, you will instead lose. Good luck, enjoy, and stick around for more fun yet to come!