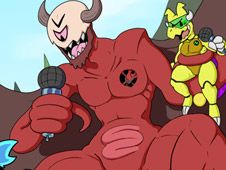 Dracobot is just one creature you will face off against with Boyfriend in the FNF Kreadian Funk mod, where each and every one of us has had tons of fun from start to finish, and how could we not with such a tracklist, and we will now prove it as we list it right here, after which we hope you start playing it all:

After choosing between the two modes, story and free play, give your best to reach the end of the songs by playing their notes according to the charts. So, press the arrow keys at the same time as the identical ones match above BF. If you miss doing it too many times in a row, you lose and have to start again from scratch. Enjoy!