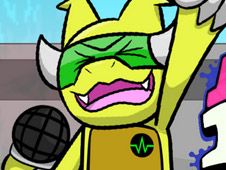 What is FNF vs Dracobot?

Dracobot, as you would probably already come to realize from his name and look, is a robot and a dinosaur all in one, and the latest antagonist that thinks can measure up to Boyfriend in a rhythm battle, something you will help prove against by defeating this new character on all these following songs:

Only you, through music, can defeat the menace of the Dracobot!

This being a full week mode, it means you can play it in either the story mode or free play mode, the choice is yours, but the goal you have is the same in both, which is to play the notes of the songs correctly, following their charts, and once you reached the conclusions of the songs, you have won.

Be careful not to miss pressing the keys by pressing too early, too late, or pressing a wrong one, because too many of these mistakes in a row will lead to you losing the whole game. Instead, we hope you win and have tons of fun!