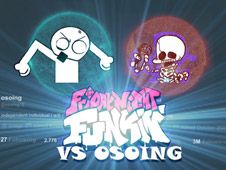 What is FNF vs Osoing a Twitter Argument But It’s a FNF Mod?

Boyfriend from FNF got into an argument with Osoing, a Twitter user, and their fight has now been translated into a musical rhythm battle in which you have to take part as well, helping our blue-haired protagonist, of course!

As the song progresses, you need to watch for the moment when arrow symbols float and match above BF's head, a moment when you need to press the identical arrow keys from the keyboard, so that you hit your notes.

Hit your notes until the song's conclusion to win, when the progress bar will be fully tilted towards you, but be careful not to miss hitting notes multiple times in a row, or you lose and have to start again from scratch. Enjoy!