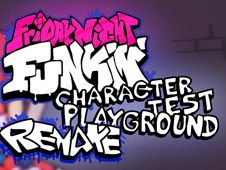 Most of our Friday Night Funkin Games online follow the norm and don't really deviate by it, and they really shouldn't, since it is the wonderful format that made so many people in love with it, although we would say the characters did so even much, which is why we now have a game for you dedicated towards the characters, a game called FNF Character Test Playground Remake, where you get to interact with the original characters from the game, as well as modded ones!

Meet and have fun with your favorite FNF characters!

Most of the characters in this series have their own dialogues and sounds that they make while taking part in rhythm battle, as well as custom songs, and through this game, you can hear them all, simply by tapping on the character you want to hear.

Of course, there are the usual suspects such as Boyfriend, Girlfriend, Daddy Dearest, Mummy Must Murder, Pico, Monster, Senpai, the Spooky Kids, or Tankman, but also mod characters such as Tricky, Whitty, Hex, Kapi, Hatsune Miku, Garcello, Sans, Imposter from Among Us, Servente, Zardy Foolhardy, Tord, and plenty others.

We're sure you will have fun testing out these characters, so start doing it right now, and we hope that this will be far from the final new game in this category you play today!