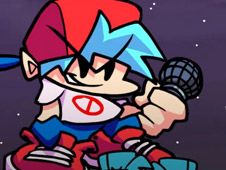 What is FNF: High Effort Test?

There was no other way that we could have started this day off than by offering you some brand new Friday Night Funkin Games online for free to enjoy, as we're always down to share with you the best new mods like that which appear, just like right now, when you get to have the most fun possible with the game called FNF: High Effort Test!

What is the High Effort Test mod all about?

Well, this game takes one of the most simple songs in the series, the Test one, and makes it way more difficult, having a chart that requires you to put in a lot of effort, just like the title suggests, and you will also see that the backgrounds have been updated and made better, the main menu is new, sprites look cooler, and everything is better.

Just like in other mods, you use the arrow keys to play the notes of the songs at the right time. That means that when arrow symbols above BF match with one another, you have to press the same arrow keys on your keyboard, no moment faster or later, because that is a miss, and missing too many notes means you lose.

Instead, play and sing all the notes at the right time, and make sure to reach the end of the song with the progress bar in your favor. It is all that simple, so start right now, and have fun like only here is possible!