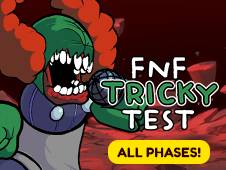 What is FNF Tricky Test?

Tricky the Clown is one of the most popular characters from Friday Night Funkin', and it's the antagonist from a game called Madness: Project Nexus. Dr. Hofnarr is his real name and in the past, he was one of the best savants that worked in Project Nexus from Nevada - until an accident occurred and he became Tricky.

In FNF Tricky Test, you can test all his phases!

Yep, in this game, we included 7 Tricky Tests:

This FNF Tricky Test is made in Construct 3, that's why this is mobile-friendly, so you can easily play it from your smartphone, tablet, and other devices that support HTML5. If you are looking for the Scratch version of the game, don't search more - here you will be able to play and test all Tricky's Phases.

Among TriKurrDurr, here you will see many other characters like:

As you may know, our FNF Test games are made by StefanN - here you will find more testing games like this game with various characters like Whitty, Ruv, Luca, and many more.

Use your keyboard or touch-screen to play.