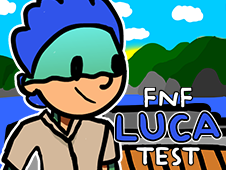 What is FNF Luca Test?

Many fans of Friday Night Funkin' game have asked us for a way to play with Luca, the famous cartoon character who bears his name and who can be watched on Disney Channel.

In the game you will be able to test the new Disney character present in the FNF series, but unfortunately there is still no Completed Mod to present to you, but we are working on it. As you can see, the main character in the game is Luca, and the activity you will have to do is to test the movements and sounds he makes, so that you can compose a song based on the arrows in the game. Each time you press an arrow you will be able to create a sound, and when the sounds are put in a certain order, they will create a song.

At the same time, you will be able to evolve the character in the game in 4 other variants, by clicking on the button that symbolizes Luca's head, on the left.

Who is Luca from this FNF test?

Luca Paguro is the main character in the cartoons present on Disney Channel in which we meet two amateur fishermen named Giacomo and Tommaso whose goal is to catch as many fish as possible. Luca is a sea monster whose main activity is to raise fish for his family in a protected area of the ocean. Since he is a child, Luca is always trying to find new people and activities that will excite him.

Use the arrows to test Luca, the new FNF character.