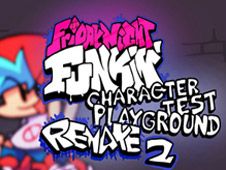 We've already shared with you the first FNF Character Test Playground, and, we've even had the third one in the series added, so it was only a matter of time until the one between them would also be appearing on our website, just like you can see right now when our team is delighted to share with you all a new and awesome game called Friday Night Funkin Character Test Playground Remake 2, which is without a doubt a reason for you to get excited!

Test your favorite characters from FNF, right now and here!

The fun thing about games like these ones is the abundance of FNF characters you get to interact with in them, as you get to make them dance, you can hear their songs, and you can see their various modes, because depending on how they feel they can have different expressions on their face, or even change their appearance.

The characters featured in this remake are:

Press play, tap the Char button to see all the available characters, click on the one you want to play with, and then you are going to be able to make the characters dance using the arrow keys, simple as that!

What are you waiting for? Start now, and enjoy this game as only here is possible!