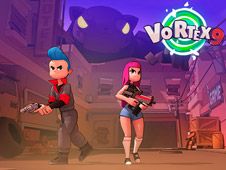 Vortex 9 is a battle royale game with shooting without the multiplayer aspect, as it follows basically the same dynamic, but it is also a game where you play against bots, but really interesting ones, as this is a world filled with robots, cat girls, and all sorts of other wacky characters. What character will you be? Well, you can be one of two, to start with:

Shoot for fun with Vortex 9 online!

Go in the arena after selecting your character and doing various customizations to their skin, but also picking out a name, and then, either solo or in a team, defeat the other characters you find around the map, since everyone is shooting everyone, and the last ones standing become the winners.

Hopefully, it will be you! Move with WASD, use G for a grenade, pick up items with F, M for the map, space to jump, and the mouse wheel to change weapons. It is as simple as that, guaranteed, and we hope you aren't missing out on the chance to play this game now, or maybe later, just make sure you are willing to try it!