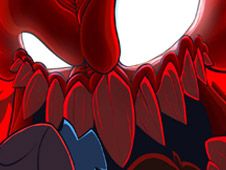 Today is really going to be a good day for you if you have lots of favorite classic characters from Friday Night Funkin, since they are going to join in on the fun of rhythm games once more, and we are starting off right now with the new and awesome game called FNF Vs. Tricky Version 2.0, featuring a new version of the series' most popular clown!

Can you defeat Tricky the Clown once more?

In today's new version of the Tricky Mod you are going to play against him on four tracks called Improbable-Outset, Madness, Hellclown, as well as Expurgation, because only if you defeat him and escape out of his hell can Boyfriend and Girlfriend be again once more!

To win you need to reach the end of the songs while playing all notes accordingly, something you use the arrow keys for. Press the arrows when the same arrows match above BF's head and make sure not to do it faster or later, or it counts as a miss.

If you have too many misses made in a row, you lose, and we really hope you are not going to allow that to happen any time soon! Good luck!