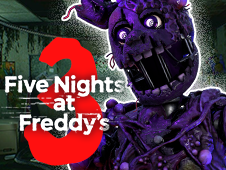 What is Five Nights at Freddy's 3?

Fazbear’s Fright is coming soon and you, as the newly hired security employee, must keep an eye on the horror-themed attraction. The interface is a little different from the previous two installments of Five Nights at Freddy’s.

●    If you move your camera all the way to your right and click, you can access the CCTV monitor and access audio. This audio mechanic will come in handy later.
●    Moving your camera to the left will access the electrical systems for Fazbear’s Fright. There are three of them: audio, camera, and ventilation.

Now, you get to deal with the only animatronic that can kill you: Springtrap.

Using the audio option on the menu to the right distracts Springtrap and lures him to other rooms. However, if the system fails, you’ll need to reboot it with the other menu. Using the camera system for too long will result in a “Video Error” that will need rebooting. A malfunctioning ventilation system will cause issues with the player’s vision that include hallucinations. Use the audio to distract Springtrap long enough to fix the ventilation system and regain your vision.

Specters Of the Past

While Springtrap is the only one who can kill the player, that doesn’t mean you still won’t have to deal with the spirits of the animatronics from previous installments of Five Nights at Freddy’s III. These specters will jump scare you, shut down electrical systems, and even cause issues with your vision. Don’t stare at them for too long.

Five Night’s at Freddy’s 3 might seem complicated, but it’s easier to deal with only one murderous animatronic while the others simply aim to get in the way of you surviving the night. Make use of the audio to distract Springtrap, don’t stare at a ghost too long, and keep the electrical systems maintained, and you’ll survive through the night.

Use the mouse to play FNAF 3 for FREE!