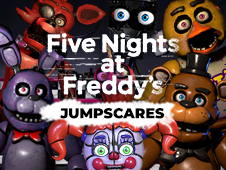 What is UCN Jumpscare Simulator?

The new UCN Jumpscare Simulator game from the category Five Nights at Freddy's is a scary game that will definitely scare you, which is why we want to mention that we do not recommend playing this game if you are under 18 years old. To play this game, you will first need to turn on your speakers, after which you will need to click on the image you want to see and hear it react.

How can you win in the game UCN Jumpscare Simulator?

For those who are passionate about this game, you will be able to edit the following options:

Voices after jumpscare: if this option is active, after each FNAF monster that will jump towards you, you will hear the scream it makes, which is often a special effect made to scare you. We warn you not to turn up the volume because this game can scare you!

In this game, you will meet all the characters from Ultimate Custom Night, and the most popular personages are: Freddy Fazbear, Bonnie, Chica, Foxy, Phone Guy, Mangie, Balloon Boy, Jay-Jay, the Puppet, Shadow Bonnie, Whitered Bonnie, Golden Freddy, Springtrap, Plushtrap

Use the mouse to play.