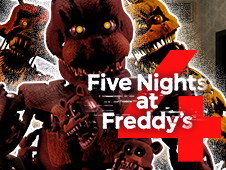 What is Five Nights at Freddy’s 4?

In Five Night’s at Freddy’s 4, we’re finally out of the security office and into a creepy child’s bedroom at night. Now that you’re out of a security office, you no longer have the benefit of utilizing security cameras to save you from the clutches of killer animatronics.

In fact, you don’t have any cameras at all. Your only guide is a flashlight that works the entire night and your own two ears. You might feel safe the first night, because this is the only time

The Importance of Sound Cues

The developers at Five Night’s at Freddy’s 4 really want to stress the importance of listening for sound cues in the fourth installment. Fortunately, the first night in Five Night’s at Freddy’s 4 is similar to the previous installment where the first night is simply to give you a feel for how the game works before it starts getting crazy. Make sure your headphones are on and make sure your volume is at max.

The Flashlight from FNAF 4 online

Your flashlight in Five Nights at Freddy’s 4 can save you, but it can also be the end of you. As you’re exploring and opening doors, you might think the first thing you should do is to turn on the flashlight? No. Remember our tip about the sound? When you open the door, simply close your eyes, and listen. If you hear something inside (breathing), then you need to shut the door and hold it until the breathing goes away.

The Closet and The Bed Are of Utmost Importance

You will need the flashlight to keep the little Freddys from gathering on the bed. If you turn around and see one too many Freddys sitting on the bed, then take a moment to shine your light on them until they go away.

Foxy eventually gets into your closet from the hallways, and you’ll want to keep checking on him until Foxy is no longer a threat. Foxy’s mechanic won’t happen the first couple of nights if you choose to ignore him as he’s meandering in the hallways, but you should still get in the habit of checking it until it becomes routine.

Otherwise, have fun with the mini-games, and don’t get caught in Five Nights at Freddy’s 4 (free version).

Use the mouse to survive in FNAF IV!