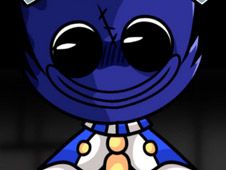 What is FNF: Minus Huggy Wuggy – Endah’s Version?

When it comes to FNF Minus Mods that you can play on our website, a talented modder known as Endah has begun making his own awesome versions, where the characters get whole new interesting looks for their minus form, which is an appearance that is meant to replicate the look for their icon, and today it's time to face off against Huggy Wuggy, which you do on the following songs: 'Playtime'.

Defeat Minus Huggy Wuggy, just like the original one!

To win the rhythm battle you need to reach the end of the song by playing all of its notes according to the charts, and, to do this, you will press arrow keys from the keyboard at the same time as the identical arrow symbols above BF match.

Don't miss to do that multiple times in a row, because if that happens, you will lose the game and be forced to start it again from scratch, and we're sure you don't want that happening, right? Good luck!