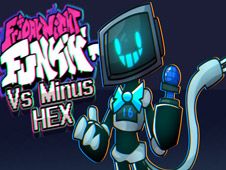 What is FNF vs Minus Hex – Endah’s Edition?

Endah's takes on the FNF Minus mods that you love so much are really awesome and fun, with new re-designs, brand new cutscenes, and animations, and all sorts of other cool visual stuff being thrown in, so we are very happy that right at this moment we could share with you his version of the Minus Hex mod, where you go up against this character on the following custom songs:

Boyfriend Vs Hex, the minus showdown you were waiting for!

Whether you play in the story mode or free play mode, the goal that you have is the same, and it is to reach the end of the songs by playing all their notes since that is the only way to win.

To do so, watch for when arrow symbols above BF match one another, and make sure to press the same keys at the identical time, but don't miss doing it too many times in a row, since that will lead to you losing.

We wish you the best, all the good luck in the world, and definitely invite you to stick around for more awesome games, all day long!