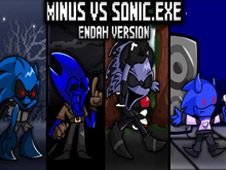 What is FNF vs Sonic.EXE Minus – Endah’s Edition?

Endah is a really good and famous modder in the world of Friday Night Funkin', and he's now remade the FNF Sonic.Exe Minus mod, where you go up against the minus version of this scary Sonic the Hedgehog, with this remake having new visual, cutscenes, and in addition to new looks for the characters, you also have a high-effort version of the charts, with the following songs being included:

Experience the joy of battling Sonic.Exe Minus, in a fresh new way!

You will choose between the story mode and free play mode, and, in either case, the only way to win is by reaching the end of the songs and having played their notes along the way, since otherwise, you can't win.

Watch for when the floating arrow symbols match above BF's head, and, at the same time, press the identical arrow keys to hit the notes, but don't miss doing it too much, or you end up losing. Good luck, enjoy!