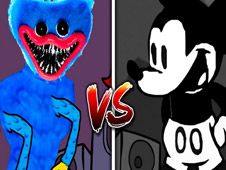 What is FNF: Mouse.AVI & Huggy Wuggy Sings Happy and Unhappy?

Both the Happy and Unhappy songs from FNF are now featured in the same mod, where you have a battle between Mouse and Huggy, two characters that work very well this time of year, the Halloween month, because they are definitely related to this month quite a bunch, and we're happy that you will now be having to much fun together!

Turn from unhappy to happy with the power of music!

To win a rhythm battle in this kind of game you need to take the songs to their conclusion, something for which you use the arrow keys, pressing them at the same time as the identical arrow symbols match above your character.

Be careful not to miss pressing the keys too many times in a row, since that leads to you losing and having to start again from scratch, obviously. Good luck, and have fun!